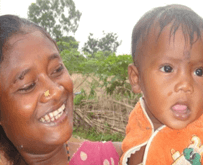 Pratima Santa (29) of Village Athantara in Khorda dist. had earlier lost two of her children to blind belief and some of their traditional practices. Timely involvement of YASC volunteer and repeated counselling of her husband resulted in Pratima delivering a LBW twin at CHC Athantara. Family counselling continues by volunteer to make Pratima stay at the medical for at least 48 hrs after delivery. During the stay, the twins developed complicacies and admitted to Capital Hospital, Bhubaneswar for another 10 days. A healthy twin and their mother returned to the village happily with their family member and thanked the YASC member for their timely advice.

From Garbage pit to classroom 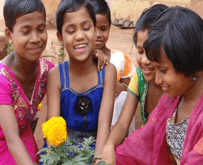 Kalia Muduli who lost his mother at an early age lived with his drunkard father and brother in Puri. There is no one in the house to look after him, and so he with his friends started collecting plastics and steel materials from different places and sells it to a rag collector. He spent his time with the street children and used to remain outside at night. He got involved in stealing in nearby shops and neighboring houses. He was identified and was brought to Open Shelter where he learned Odiya barnamala, matras, numbers system, addition, subtraction, multiplication of Mathematics. Within the short stay at open shelter, he could develop his age appropriate learning and writing skill.